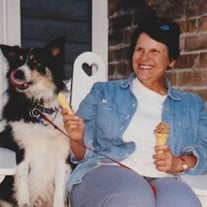 Susan Kay (Heringer) Giddings February 25, 1942 – September 2, 2021 Susan Giddings was born in Bismarck, North Dakota and grew up in Salem, Oregon. She graduated from South Salem High School and attended the University of Oregon, receiving an MS in secondary education with an emphasis in botany. Susan married Gary Gregor in 1963 and moved to Salt Lake City, where they had a son, Garrett. While five months pregnant, she did research studying mistletoe pollen in the Uinta Mountains while living in a trailer. She loved the Wasatch Mountains and enjoyed hiking to see wildflowers in the summer and the aspens turn color in the fall, teaching Garrett the names of all of the plants on their walks. Susan met and married J. Calvin Giddings in 1972, and helped raise his two sons, Steven and Michael, for the next 10 years. During this time, Susan enjoyed travelling internationally. She spent three months with her family in Peru and six months traveling across Africa. After divorcing Cal in 1982, Susan went back to school and trained in radiation science. She then got a job as a radiation physicist for the Department of Environmental Quality in Utah. She adored her new life and work, remaking herself as a successful professional and a single mom. A favorite part of her job was traveling across Utah and meeting interesting people, inspecting the x-ray machines of large hospitals and scientific facilities to small town veterinarians. She remained happily unmarried. Susan was a strong proponent of education, and was fascinated by medicine. Living near the University of Utah hospital, she rented rooms in her home to dozens of medical students over a period of two decades who were doing their rotations. Later when it was harder for her to travel, Susan enjoyed keeping up with her friends in Germany, England, and Singapore as well as chatting with people she met who were from other countries. Susan was passionate about orchids and had many varieties in her greenhouse. There was always at least one blooming in her home. Susan was proud of her son Garrett and thrilled that in recent years he had started to share her love of orchids, sending some home with him each time he visited. Susan passed away unexpectedly in her home at the age of 79. She is survived by her son Garrett Gregor, daughter-in-law Virginia Somes, sister-in-law Patty Heringer, nephews Peter and Eric Heringer and their families, and “second son” Luis Leal and his family. Due to the pandemic no memorial service will be held, but memories of her would be appreciated. Susan loved dogs, and had two over many years, Kelley and Shep. If you wish to make a donation in her name, please consider the Humane Society of Utah.

Send flowers to the Giddings family.