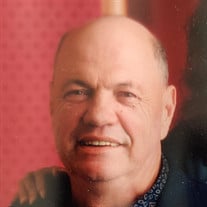 Stanford W. Rands, age 79, passed away on June 23, 2020 in Salt Lake City, Utah. He was born in Salt Lake City to Thelma Wiggill and Duane Rands on July 2, 1940. He was the youngest of three children and grew up in Rose Park and went to West High School. He graduated in 1957. After high school, he went to work for Kennecott as a Heavy Machine Operator. He enjoyed driving those larger than life trucks and did so for 40 years. In the meantime, he met and married his first wife Janet and had 4 children together- Joseph, Christina, Deon, and Shannon. They divorced and later he married Jovita and had 2 children- Katherine and Eunice. In his spare time he enjoyed camping, fishing, hunting, and working in the yard. He was happiest being outside and would spend a majority of summers out in the sun as much as possible. Stanford had a big love for music. He played the drums in high school and sang in the church choir for a few years in his adult life. He said Elvis was his hero and enjoyed playing his records and watching his movies. He had a deep love for the Lord and went to church every Sunday before his health declined. Jovita would read him the bible and they would pray together nightly. His favorite bible verse was John 3:16- For God so loved the world that he gave his one and only Son, that whoever believes in him shall not perish but have eternal life. We would like to thank Tender Care Hospice and Life Care Center of Salt Lake City for care of Stanford in his last days. Stanford is survived by his wife- Jovita, children- Joseph, Christina, Deon, Shannon, Katherine, and siblings- Duane and Faye. Stanford is preceded in death by his mother Thelma, father Duane, and daughter Eunice. A Memorial Service will be held June 30th, 2020, 10:30 am at South Valley Community Church (1861 West 7800 South) in West Jordan. For those who are unable to attend, there will be a live stream of the service and a recording posted online later. Arrangements are under the direction of Wiscombe Memorial.

Stanford W. Rands, age 79, passed away on June 23, 2020 in Salt Lake City, Utah. He was born in Salt Lake City to Thelma Wiggill and Duane Rands on July 2, 1940. He was the youngest of three children and grew up in Rose Park and went to West... View Obituary & Service Information

The family of Stanford W. Rands created this Life Tributes page to make it easy to share your memories.

Send flowers to the Rands family.