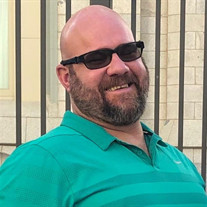 Ryan Charles Gray (42) passed away peacefully in his sleep 22 September 2019 in Portland, Oregon. He is survived by his devoted husband Kevin John Burns and his dog Shitake. Ryan the fourth of six children was born 11 June 1977 in Salt Lake City, Utah to loving parents John Morgan Gray & Diana (Nelson) Gray. He was raised in The Church of Jesus Christ of Latter-day Saints and was a Seminary Graduate. Ryan was an Eagle Scout and loved the outdoors and serving others with his generous heart. While serving in the New York Rochester Mission, he volunteered to learn sign language to work with a deaf companion to better serve others. Ryan was proud to be named after his grandfather, Charles Abner Gray whom he claimed as his guardian angel throughout his life. Ryan married Kevin, the son of Keith J. & Dyane (Miner) Burns, his loving companion of 18 years on 23 December 2013 in Farmington, Utah. Standing at 6’ 61/2” he was loved as a gentle giant with a very friendly nature, jovial and fun personality. He started school which he loved at Truman Elementary in West Valley City, Utah where making new friends came easily. When his family moved in 1983 he attended Sunrise Elementary in Phoenix, Arizona where he played soccer, baseball, piano, and started saxophone. While at Desert Sky Jr. High, Ryan was an honor student and active in cross-country, track and field, basketball, and wrestling, He was a Junior Olympian in high jump and enjoyed playing saxophone in the marching band. While at Barry Goldwater High School Ryan played sax in the jazz band, lettered in cross-country, and played basketball. In 1992 a school boundary change led him to Deer Valley High School where he graduated in 1995 with honors lettering in crosscountry, swimming, and track & field. He attended college with academic scholarships at BYU and ASU West. He was a decathlon athlete with top rankings in the western states while on track scholarship at Glendale Community College. In 2007 he graduated in nursing at SUU and worked over ten years as a Registered Nurse (RN) in healthcare at St. Mark’s Hospital and for the Salt Lake County Health Department. For the Salt Lake County, Ryan supported the refugee and LGBT communities on health issues and served as a first responder for health outbreaks. As a member of the Utah LGBT Flag Football League, Ryan cemented many lifelong friendships, playing center and blocker for the SLC Avalanche Team. He served as a local commissioner, coach, and recruiter supporting the Mountain West and National Gay Flag Football League (NGFFL). In these roles, he increased self-respect and confidence of LGBT persons helping the larger community, regardless of different identities, abilities, or status to promote physical exercise and health with his peers. Ryan lived the last 21 months and enjoyed working as a “Manny” for his sister Melissa in Portland. The family appreciates Kevin and Melissa for their care and service to Ryan. His surviving siblings and in-laws will all miss him dearly: Jennifer Brittany Theobald (Jon), David John Gray (Brittany), Melissa Gibby (Garth), Michael Nelson Gray (Rachel), Andrew Morgan Gray (Taryn), Karine Burns Pitcher, Kary Burns (Tanya), Brett Burns (Susan), Shon Burns (Brenda), Brandon Burns (Megan), Kris Burns (deceased) and a combined 41 nieces and nephews, 6 greats, and lots of treasured cousins. All who knew Ryan loved to be with him and enjoyed his humor, zest for life, and caring about others. He would give you “the shirt off his back.” We will miss his bright hearty laugh, warm hugs, strength to serve anyone in need, and dedicated friendship. Go in peace Ryan until we meet again. Family viewing Friday 11 October 6-8:00 PM at O’Donnell Mortuary. Visitation with family & friends at 12:00 PM Saturday followed by Memorial Services at 12:30 PM at O’Donnell Mortuary Chapel, 372 East First South, Salt Lake City, Utah. Family Interment is 2:00 PM at Salt Lake City Cemetery, 200 N Street, Salt Lake City, Utah. In lieu of flowers, donations accepted direct to the family via Venmo, @Jenni-Theobald or at www.gofundme.com/f/the-ryan-gray-story.

Ryan Charles Gray (42) passed away peacefully in his sleep 22 September 2019 in Portland, Oregon. He is survived by his devoted husband Kevin John Burns and his dog Shitake. Ryan the fourth of six children was born 11 June 1977 in Salt Lake... View Obituary & Service Information

The family of Ryan Charles Gray created this Life Tributes page to make it easy to share your memories.

Ryan Charles Gray (42) passed away peacefully in his sleep 22...

Send flowers to the Gray family.