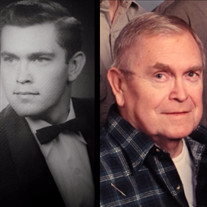 Having lived a long and fulfilling life our husband, father, and grandfather returned to our Heavenly Father on January 26, 2020 at the age of 85 of causes incident to age. Roger Wesley Fletcher was born to Florence Rose Lemmons and Walter Leslie Fletcher on July 18, 1934 at Ft. Riley, Kansas. He was the oldest of five children. Roger was a simple and quiet man of strong integrity who lived his life devoted to his family. He is known for his art, organization skills and his kind and loving ways. He married the love of his life, Bevery Sue Hassell on May 21, 1960 in Tulsa, Oklahoma and they were later sealed in the Salt Lake Temple on May 25, 1960. Together they created a family and life that worked well for them. Roger was a lifelong member of The Church of Jesus Christ of Latter-day Saints who was always faithful and loved the scriptures. Roger enjoyed reading, Archeology, drawing, spending time with family and rides in the beautiful canyons of Utah. Roger spent a large portion of his younger years in Oklahoma, but later moved to Utah and made his permanent home there. As a teenager he lived in Morocco with his family while his father worked for the Corp of Engineers. He has fond memories of his life there, including being the Editor of his school paper, participating in theater, and graduating with a class of eight. After returning back to Oklahoma he started college, served in the U.S. Army for two years, worked as a police officer and started his family. A few years later he and his family moved to Provo, Utah to finish his Bachelor's Degree in Fine Arts at Brigham Young University (BYU). While in school he played football with BYU as a linebacker. Roger is also a published poetry author. In Utah, Roger continued his life as a Civil Servant and started his career with the U.S. Forest Service as a Cartographer. Along with this job he worked in church security for the Church of Jesus Christ of Latter-day Saints. He could share many intriguing stories of his time there. Along with the many "ups" Roger had in life he also had many lows including a major car accident which forced him to retire way too early and other serious health issues. Fortunately, he continued to bounce back when we all worried he wasn't going to make it. He truly is a man of strength and fortitude and pushed forward even in his dying days. He leaves behind a legacy of hard work, staying busy, and the importance of trying new things even if they are uncomfortable. Roger is survived by his wife and children Dru (Scott) Beecher, Eric Fletcher, Eldon (Ginger) Fletcher, Brooke Fletcher, and Whitney (Aaron) Sellers along with 13 grandchildren and 13 great grandchildren. He is also survived by two brothers, two sisters, and many nieces and nephews. He was preceded in death by his parents, son Mark Wesley and grandson Jeremy Beecher. Viewing will be held at the Church of Jesus Christ of Latter-day Saints, 7825 West Sharon Drive, Magna, Utah 84044 on Thursday, January 30th, 10:00 - 11:00. Graveside Service will follow at 12:00 at the Utah Veterans Cemetery & Memorial Park, 17111 South 1700 West, Bluffdale, Utah 84065. Special thanks to the caring staff at St. Joseph's Villa who have become like family to our mom and dad. We are also so grateful for the Hospice nurses who so gently and lovingly cared for our dad. You truly blessed our lives. Arrangements are under the care and direction of Wiscombe Memorial.

Having lived a long and fulfilling life our husband, father, and grandfather returned to our Heavenly Father on January 26, 2020 at the age of 85 of causes incident to age. Roger Wesley Fletcher was born to Florence Rose Lemmons and Walter... View Obituary & Service Information

The family of Roger Wesley Fletcher created this Life Tributes page to make it easy to share your memories.

Having lived a long and fulfilling life our husband, father,...

Send flowers to the Fletcher family.