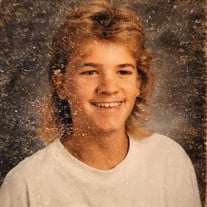 Robert Bernard Rudd II passed away from this life into the next in March 2022. It was unexpected, and he was far too young, but we know deep down, he is safe and at peace, surrounded by those he loved who have passed before him. Robert was born on June 29, 1974 in Killeen, Texas at the Fort Hood Army Hospital. Robert was the first born to Robert Bernard Rudd and Martha Rita Snellgrove (Cunningham). He was a thoughtful, deep soul from the beginning. If you had the opportunity to be loved by him, it was a priceless gift. Robbie was able to travel and live in many states and countries like Germany, due to his dad being in the US Army. It opened his mind to a variety of backgrounds and opportunities. As a child, Robbie, as his siblings and other family members like to call him, was a mischievous, fun, and loving kid. He always liked to keep things interesting with his out of the box, and artistic mind. He had the strength of Hulk and could beat anyone in a game of arm wrestling. He was the best big brother and always cared about them all. In 1994, Robert met and fell in love with Misty Kooyman. Together they had Kierra Tresa Rudd. Oh boy did Robert love his little girl. She was his whole world, and what kept him going each and everyday, until the very end. Robbie always had an inventive and creative mind. He was incredibly talented as a musician and an artist in drawing and painting. He loved to tell you all about music and his artwork. His singing voice was one in a million, it was hauntingly mesmerizing. If you needed a one of a kind tattoo, he was certainly your man. Later in life Robbie truly sought peace through Buddhism and practicing jiu jitsu. He would be first in line to see a martial arts film. Another thing that brought him peace was his favorite scent, Nogchampa. Robbie’s exterior was often hard and standoffish, but if you truly knew Robbie, he was a softy to the core with the most incredible heart. He could talk to anyone anywhere. He could put people at ease with his presence. He touched so many lives, and left a loving artistic mark on this world. He will truly be missed by all he knew or whoever crossed his path. Robbie is survived by his daughter Kierra Tresa Rudd, siblings: Jason Rudd, Delena Rudd, Christopher Rudd, Amber (Rudd) Horrocks, and April Rudd. He is preceded in death by father, Robert Rudd, stepmom, Jeanine Rudd, and grandpa, Bernard Rudd A memorial open house will be held in his honor on June 18th from 12pm-4pm. It will be held at the Edmond Elsworth Group site up Millcreek Canyon (3800 Mill Creek Canyon Rd, Salt Lake City, UT 84124. Look for signs nearing the location.)

Robert Bernard Rudd II passed away from this life into the next in March 2022. It was unexpected, and he was far too young, but we know deep down, he is safe and at peace, surrounded by those he loved who have passed before him. Robert was... View Obituary & Service Information

The family of Robert Bernard Rudd II created this Life Tributes page to make it easy to share your memories.

Robert Bernard Rudd II passed away from this life into the next...

Send flowers to the Rudd family.