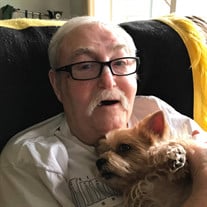 Richard Duane Chase AKA Squeeze, but we knew him as dad came into this beautiful world on August 17, 1948 in Logansport, Indiana to Gilda Nolte and John Chase. His soul left his body December 2, 2019 in Ogden, Utah. Dad was one hell of a man that had stories for days and could hold his own in a bullshitting story. Dad was a Marine through and through who served three tours in Vietnam. His time in the military is what really defined him as a man and a piece of his history he resonated with during the later years of his life. Dad loved his Parker family...his career held significant meaning and after 44 years was forced into retirement (literally forced) because his old body couldn't handle it anymore. He loved that place and his boys who he raved about and had a nickname as well as a story for everyone of them. Dad was raised on a farm, loved John Deere tractors, NASCAR, Drag races and anything to do with planes. Dad had the most infectious smile that would light up a room and sparkle blue eyes that shined bright until the day they closed. Dad would give the shirt off his back, put cash in your hand or bend over backwards to help someone out. His loss was unexpected and one that has had a major impact on his friends and loved ones. Life will not be the same without his sarcasm and wild sense of humor. We are going to miss talking to him, seeing his kind face and sharing special moments together. All we ask is that you continue sharing his stories and memories of him to keep him alive in your hearts. We wish you all love and light. Survived by his daughter Heather Chase and son-in-law Conan Butterfield, son John Chase and daughter-in-law Tina Chase, his step-daughter Mandy Davies and son-in-law Aaron Davies, his sister Patricia Sittig, his brother Alan Chase and we can't forget Toko Junior (his baby dog). Plus all of his extended family, friends, neighbors, community partners and Parker family. Preceded in death by his father John Chase, mother Gilda Nolte Chase and sister Sandra Melvin. Visitation, Funeral Service, Graveside Service Funeral Services will be held at Utah Veterans Cemetery & Memorial Park 17111 South Camp Williams Road, Bluffdale, Utah 84065. Family Visitation at 1:30 PM, Funeral Service at 2:00 PM, and Graveside Burial at 3:00 PM on December 13, 2019.

Richard Duane Chase AKA Squeeze, but we knew him as dad came into this beautiful world on August 17, 1948 in Logansport, Indiana to Gilda Nolte and John Chase. His soul left his body December 2, 2019 in Ogden, Utah. Dad was one hell of a man... View Obituary & Service Information

The family of Richard Duane Chase created this Life Tributes page to make it easy to share your memories.

Richard Duane Chase AKA Squeeze, but we knew him as dad came...

Send flowers to the Chase family.