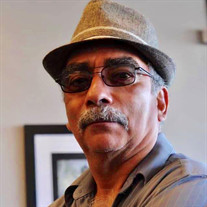 Patrick passed away on Tuesday, August 20, 2019 at St. Joseph’s Villa in the presence of his daughter, Salchell and his niece, Elena. He was born on December 16, 1955 in Salt Lake City, Utah to Theodora “Teddy” and Alfred “CoCo” Sanchez. He was married to Victoria Chavez for a time and they later divorced. Patrick had the kindest soul and was selfless and loyal. He wore his heart on his sleeve. To know him was to love him and the love he gave was returned to him, tenfold. He was adored by so many and humbly took on the role of second father to many nieces and nephews. Patrick dedicated his life to his family and gave of himself every day until he could give no more. Patrick is survived by his son Patrick Anthony; his daughter, Salchell (Rafael); his grandchildren, Zoreh, Karla, Maryssa, Naiara and Manuel. He loved them more than life itself. They will greatly miss their “Pop” and remember him fondly. Also survived by his sisters: Angie and Christina, who he adored until the end; his brothers: Ronnie (Annie) and Joseph (Andrea); his brother-in-law, Jose; his sister-in-law, Eva; his aunt Stella; as well as many nieces, nephews and cousins who will hold him forever in their hearts. Patrick’s journey here has ended and he suffers no more. He has joined those who have preceded him in death: his father, Alfred “CoCo” and mother Theodora “Teddy; his brothers, Danny (Margaret), Jay and Kenny; his sisters, Mae and Nancy. They are united now and watch over and care for us from the other side. They are waiting for us to join them one day. We will be celebrating his life, one well lived, on Sunday, August 25th from 5-9 pm at East Coast Subs, 3490 South State Street, SLC, UT.

The family of Patrick Sanchez created this Life Tributes page to make it easy to share your memories.

Send flowers to the Sanchez family.