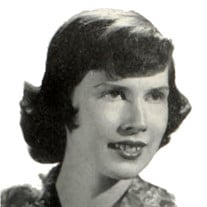 Patricia “Pat” Ann Steadman, 86, passed away in the early morning of March 29, 2020 in Millcreek, Utah. She was born on July 17, 1933 in Salt Lake City, Utah to Edith Watkins Clark and Pratt Anderson Clark. She was the eldest sibling to her sister Karen and brother Richard. As a consequence of many household moves during World War II, she attended schools in Idaho, Wyoming, California, and Utah. Her father served as a Lieutenant in the U.S. Navy. After WWII, her family settled in Logan, UT where she graduated from Logan High School in 1951. She excelled in debate and was the editor of her yearbook her senior year (and assistant editor her junior year). She was very close to her mother and considered her to be an ally and a friend. Pat met her first husband, James “Jim” Robert Frates, while attending the University of Utah. They married on September 4, 1952 and raised two sons in Salt Lake City. Following Jim’s unexpected passing in 1981, she married Paul Steadman on April 23, 1983. They ultimately moved to Chicago, IL where she frequented the museums and symphony concert halls. She enjoyed traveling, visiting many states and countries. Pat continued her education throughout her life. She worked as an insurance adjuster and an art framer. In 2009, at the age of 75, she graduated cum laude with a BFA in Art from the University of Illinois at Chicago. (A major accomplishment!). She was an avid reader, a cruciverbalist, and an extraordinary seamstress and quilter. Pat painted and drew her entire adult life. Her many beautiful watercolor paintings fill the homes of her children and grandchildren. Pat was a member of the Church of Jesus Christ of Latter-day Saints. She is survived by her sons: Anthony “Tony” Frates (Susan) and Vincent “Vince” Frates (Sarah); siblings: Karen Clark McCormick and Richard Clark; grandchildren: Angela Pace, Alison Frates, and Luisa Frates; and great-grandchildren: Riley Pace and Max Pace. She was predeceased by her parents, her first husband Jim of 28 years, and her second husband Paul of 35 years. No memorial service will be held on account of COVID-19 “stay-at-home” restrictions. In lieu of flowers or gifts, please consider making a donation to The Nature Conservancy of Utah. https://www.nature.org/en-us/about-us/where-we-work/united-states/utah/ Arrangements are under the direction of Wiscombe Memorial.

The family of Patricia A Steadman created this Life Tributes page to make it easy to share your memories.

Patricia “Pat” Ann Steadman, 86, passed away in the early morning...

Send flowers to the Steadman family.