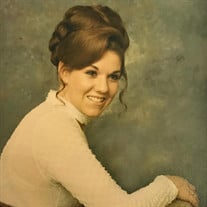 Patricia Ellen Eggleston Dobbs, age 79, transitioned peacefully into the realm of eternity New Years Day morning 2021 at her daughters home in West Valley City Utah after a courageous battle with breast cancer. She was born April 28, 1941 in Modesto California to James Andrew and Ivy Caldwell Moore and was later adopted by Ivy's second husband Charles Ronald Eggleston who loved her as his own. Patricia married Bart Chickering July 17, 1958. Together they had four children. They later divorced. She then married William (Bill) Nuttall April 6, 1973. Together they had two children. They later divorced. Her final marriage was to Dennis Dobbs July 29, 1989. Patricia graduated from Redding Union High School, Redding California, in 1959. She was a very talented singer and dancer and knew how to please a crowd. She was a great mother who taught her children about God and his Son Jesus Christ. She taught us of Their great love for us and about their power of forgiveness. It was something she practiced herself. She was the most forgiving person I've ever known. Mom loved to paint and was very good at it. She was good at just about anything she put her mind to. Especially anything crafty. She loved to make things for people. She was also an excellent seamstress. Growing up, we had more homemade clothing than store bought. We didn't know how lucky we were. Patty is survived by her children, Roger (Lita) Chickering, Lea Johnson, Sandy (Mark) Harmon, Guy Chickering, Myste Nuttall and Forest Nuttall. Her Bonus children, David (Tammy) Nuttall, Michael (Brenda) Nuttall, Gail Nuttall Peak, Karen Nuttall, Wade Potter and Tami Wilkin. 30 grandchildren and 16 great grandchildren. Sisters, Mary Jane (George) Bailey, Linda Scott, Karen (Mike) Dellis and brothers, Gerald Eggleston and Ronald (Suzie) Eggleston. She is proceeded in death by her parents and her bonus son-in-law Steven Peak. Services will be held via Zoom on Friday January 8th 2021 at 10:30 a.m. Link: https://us02web.zoom.us/j/81623869692?pwd=TW5SRzN3ZFBNN0pJMCtTcIJqMUxmUT09 Internment into the Salt Lake City Cemetery. The family would like to thank all of the great people at the Huntsman Cancer Institute and the Huntsman at Home Group, for their special care of mom. A very special heartfelt thank you to Dr. Mei Wei. for everything she did for mom.

The family of Patricia Ellen Eggleston Dobbs created this Life Tributes page to make it easy to share your memories.