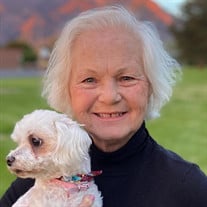 Nancye Schumann Sweet 1946-2022 NANCYE SCHUMANN SWEET, age 75, passed away on March 17, 2022, in Sandy, Utah due to the effects of vascular dementia. Nancye was born on July 2, 1946, in Washington, D.C. to Margaret Jane DeLashmutt and Richard... View Obituary & Service Information

The family of Nancye Schumann Sweet created this Life Tributes page to make it easy to share your memories.

Send flowers to the Sweet family.