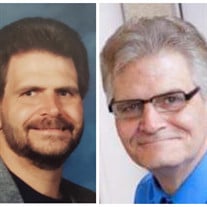 On September 27, 2019, we lost our big-hearted father, grandfather, brother, uncle and friend to a long battle of health issues he's been fighting for many years. Michael Lane Matthews was born on December 2, 1958 to Lane and Maggie Matthews. He cherished his parents deeply and was especially a mama's boy. He also adored his three sisters and 2 brothers. Michael married Mary Ortiz on March 8, 1980, who, although divorced 28 years later, was the love of his life and best friend. They had three daughters together and two granddaughters. Michael was a very stubborn and prideful man who lived and died by his own rules and on his own terms, despite his daughters and doctors many protests. He was also a goofball with a very colorful and bright sense of fashion. He often liked to feed the ducks and pigeons and enjoyed carrying around his music player and being the DJ for everyone at his assisted living facility. He loved making people laugh and always had to share his love and knowledge of music to everyone around him. Despite his declining memory since being diagnosed with dementia in 2011, he retained absolutely everything there is to know about Elton John, The Beatles, Queen and his favorite superhero, Superman. Yes, he was a comic book enthusiast as well. He had a giant heart and you couldn't say goodbye to him without getting a big hug and an " I love you." Every time. He was "silly grandpa" to his two granddaughters that he loved very much. He was a "grump" to some, a pain in the butt to most, but was definitely a one of a kind man that we could never forget and will always love and miss dearly. Michael is survived by his three daughters Amanda, Valleri (Matt) and Cheyenne (Nate), and two granddaughters Mila Zwan and Nora Higley. He is also survived by his brothers and sisters, Lorri (Dave) Julius, Casey (Mickie) Matthews, Kip (Faithann) Matthews, Mindy (Korey) Warren, Heather (Jason) Hankins, and many nieces and nephews. He is preceded in death by his mother, father and grandparents. Our dad hated funerals. He always said he didn't want one. He wanted a party where everyone was having fun. So please join us on October 13, 2019 to celebrate his life. There will be music and food. Please feel free to dress in your favorite band, superhero, horror or football t-shirt in remembrance of the things he loved. It will be held from 10:30 AM- 2:30 PM at Jordan Event Center 9112 S. Redwood Road, West Jordan, Utah, 84088. Remembrances may be made in the form desired by friends. Flowers are welcome or contributions may be made to the family for his memorial expenses. Arrangements were under the direction of Wiscombe Memorial.

On September 27, 2019, we lost our big-hearted father, grandfather, brother, uncle and friend to a long battle of health issues he's been fighting for many years. Michael Lane Matthews was born on December 2, 1958 to Lane and Maggie Matthews.... View Obituary & Service Information

The family of Michael Lane Matthews created this Life Tributes page to make it easy to share your memories.

Send flowers to the Matthews family.