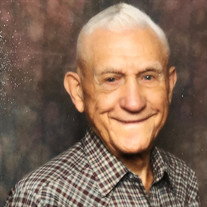 Max Leroy Burdick, Sr., age 96, passed away peacefully at home on June 4, 2019. He was born April 2, 1923 in Moulton, Iowa to Stephen and Mary Elizabeth McClurg-Burdick. He was married to Dona Lou Connell-Burdick, and their children are Julie Ann Burdick Moffat (Ralph Randy) and Max Burdick (Cheri). He then married Dorothy Blanche Steele Burdick, and their children are Julie Burdick Gubler (Bill) and Jane Ann Day (John). Max learned to work hard at an early age, moving continually with his family. At age ten, he was a sheepherder, often alone for months in the Star Valley Wyoming mountains. It was just him, a dog, a horse, and a flock of sheep. He received supplies once a month. At age 12, he was a milk truck driver. Also in Max’s youth, he helped shear sheep, herd cows, farm, fix fences, and train horses. At age 14, he joined the ROTC and proudly wore his uniform, which included a cap and black tie. Upon completing the ninth grade, his formal education ended as he turned his attention to working full-time. At the age of 16, and with his parents permission, Max joined the U.S. Navy and within 5-years he achieved the rank of Chief Petty Officer. A short time later he made his new home aboard the U.S.S. St. Louis, carrying the rank and responsibilities of First Gunners Mate, and spending his days and nights fighting for Freedom in the middle of WWII. Max was always proud to be a survivor throughout his difficult and challenging life, which included surviving WWII and the December 7th 1941 attack on Pearl Harbor. Max was honored on the 50th anniversary of the Pearl Harbor attack by being awarded the Congressional Medal of Honor. After the war, Max worked at his Father-in-Law’s business, Pocatello Plumbing and Supply as a journeyman plumber. He managed to take over that business and developed it into Burdick Contractors which spanned a five-state region. He had division offices in Salt Lake City, Denver, Las Vegas, Phoenix and Sacramento. Of note, his company laid the water and sewer pipelines for the Las Vegas Strip. Along the way, he obtained his pilot’s license with an IFR rating, and enjoyed flying to visit his division offices. Max was a devoted member of the Church of Jesus Christ of Latter-day Saints and contributed much to his church and community. He handed out hundreds of Books of Mormon and served in numerous callings. For years, he was in charge of the LDS Cattle Ranch in Grantsville, Utah. He was also instrumental in improving the baseball fields around Salt Lake. In recognition of his extensive service, the “Max Burdick Field” was named after him. Max ran his first marathon at age 54 and his first Ironman Triathlon in Kona, Hawaii at age 60. He then went on to run 20+ marathons and completed numerous traithlons until age 84, often winning first place in his age group. He thus was nicknamed, “Ironmax.” Max was an adventurous soul! In addition to flying, marathon and triathlon racing, Max was an avid dirt-bike rider, tennis player, golfer, skier, dancer, hunter, fisherman, horse-rider, entrepreneur, inventor, health and wellness advocate, and world-traveler, among many other things. Max was a loving and devoted father, grandfather and great-grandfather. He is dearly missed. He is survived by his four children, 28 grandchildren, 84 great-grandchildren and 4 great-great-grandchildren. He is preceded in death by three brothers and one sister and is survived by one brother Glenn Arthur Burdick (Joyce).

Max Leroy Burdick, Sr., age 96, passed away peacefully at home on June 4, 2019. He was born April 2, 1923 in Moulton, Iowa to Stephen and Mary Elizabeth McClurg-Burdick. He was married to Dona Lou Connell-Burdick, and their children are Julie... View Obituary & Service Information

The family of Max Leroy Burdick Sr. created this Life Tributes page to make it easy to share your memories.

Send flowers to the Burdick family.