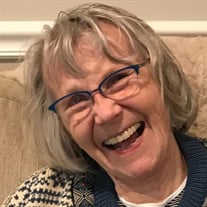 Maryann (Annie) Lewis Glasgow 1935-2020 Life is a great big canvas, and you should throw all the paint on it you can – Danny Kaye We celebrate Maryann Lewis Glasgow, who, after a life of love, learning, music, adventure and service to others, passed away peacefully on April 17, 2020. She was smiling to the end. Except for her feisty moments. Dementia has its good and bad months/days/minutes. Maryann was born in Meadville, PA on July 18, 1935. Her parents were Mary Tomko, a teacher, and her father, John Glenn Lewis, an engineer with the Talon Zipper Company. She was the eldest child in a family that included her sister. She grew up in PA and NY. She began undergraduate studies at the College of Wooster, in Ohio, but transferred after a year to the University of Rochester, NY to be with a boy, Lowell Glasgow. They married on June 16, 1956, the week after she graduated from college with a BA in education. They stayed in Rochester while Lowell completed medical school, and a pediatric residency. They moved their family to Salt Lake City in 1970 where Lowell had accepted a position as Chairman of Microbiology, and later, in 1973, Chairman of Pediatrics at the University of Utah. Maryann was an integral support to her beloved Lowell up until his death from a heart attack at age 49, in February, 1982. In those 12 years in Utah Maryann mothered, taught, volunteered, (UNICEF and Head Start) worked for peace, sang in church choir, traveled with Lowell on medical business trips around the world (Europe, Japan, Nigeria, Soviet Union), threw fabulous parties and earned her Master’s in Social Work at the University of Utah. In the Fall of 1981 Maryann took a position as Director of the Family Support Center Satellite in Midvale. She threw herself into the Centers stated purpose of protecting children, strengthening families and preventing child abuse in Utah. In the years following Maryann worked in private practice as a licensed clinical social worker in Utah and North Carolina. She served for numerous years as a delegate in International women’s peace meetings, and taught in Universities around the globe focusing on women’s health, education and status, and mental health education in communities. Maryann (Annie) had a beautiful voice and sang on stages all over the world with the Oratorio Society of Utah, and loved being a part of church choirs in NC and MN and at the Holladay United Church of Christ in Salt Lake. She considered Handel’s Messiah to be some of the world’s finest music and her favorite to sing. In 2001 she moved to Roseville MN, to spend a number of happy years with Dr. Dale Anderson on the shores of Lake Owasso. They teamed up to present workshops on humor and healthy aging. When it became clear that she was in the beginning of cognitive decline, she moved to Salt Lake City in 2016 to be cared for by her daughter. There she renewed a friendship with Ralph Faulkner. Things that gave Maryann (Annie) joy were her family, Farmers markets, the MN State Fair, choral music, humor and laughing, art museums, and treasured friends of which there are many. Maryann was preceded in death by her parents and her husband, Dr. Lowell Glasgow, MD. She is survived by her children: Russell Glasgow in Cottonwood AZ, Lauren Carlson (Noel) and Scott Glasgow (Paula Almenar) of Salt Lake City, her grandchildren: Dr. Haley Carlson Davis, MD (Ethan) of Durham, NC, Annan Carlson and Milo Glasgow Almenar of Salt Lake City, and her great grandson Clark Emerson Davis. Her sister, Sarah ‘Sally’ Craw (Charles) of Lafayette, IN also survives her. She leaves a nephew, Mathew Schmunk and family in Portland, OR. Heartfelt thanks go out to her caregivers at Highland Cove Assisted Living, Wentworth at Willow Creek, and Active Hospice. Rather than flowers, donations may be made online in her memory to The Family Support Center. www.familysupportcenter.org. Arrangements to be made by Wiscombe Memorial. Services will be postponed until we can safely gather and hug!

Maryann (Annie) Lewis Glasgow 1935-2020 Life is a great big canvas, and you should throw all the paint on it you can &#8211; Danny Kaye We celebrate Maryann Lewis Glasgow, who, after a life of love, learning, music, adventure and service... View Obituary & Service Information

The family of Maryann (Annie) Lewis Glasgow created this Life Tributes page to make it easy to share your memories.

Send flowers to the Glasgow family.