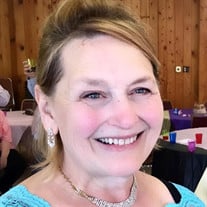 Marilee Garrett, age 64, passed away on February 9, 2020 in SLC, UT. She was born on July 4, 1955 in SLC, UT to Diane Parkinson & Melvin Earl Brady. She was married to Paul Garrett. She graduated from University of Utah 1980 with bachelors... View Obituary & Service Information

The family of Marilee Garrett created this Life Tributes page to make it easy to share your memories.

Send flowers to the Garrett family.