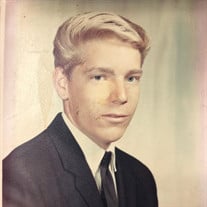 Kerry Ray Swink passed away peacefully at his daughter’s side on the afternoon of Monday, August 10th 2020 at 2:10 pm at the age of 69. He died from COPD and complications due to COVID-19. Kerry was born August 19th 1950 in Tacoma, Washington. He was the youngest of four children, born to Dortha Mae O'Neil and Shannon Albert Swink. On May 8th 1986 Kerry became a father to the light of his life Amanda Rae Swink, for the rest of his life he would talk of nothing else but his daughter and later son-in-law, Anthony and grandchildren, Isabelle and Ronan. They were his very reason for living. Kerry was a talented baseball player. He was a pitcher and played second base. He had what was known as the "Swink Arm". Baseball was a big part of Kerry's upbringing and his favorite team was the St. Louis Cardinals. He loved to watch the world series every year. Kerry graduated from Grand County High School in Moab, Utah in 1968. He then attended Southern Utah University. Kerry worked for his father most of his life at his salvage yard, Bert's Auto Supply. If there was a part needed Kerry knew exactly where it was located, the year of the car and the intricate details only someone with a mechanics brain would comprehend. He was a life long member of The Church of Jesus Christ of Latter-day Saints. He attended the fourth ward in Moab, UT. In 1966 Kerry was in a car accident that forever altered his life path. He was in a coma for a period of time and suffered a traumatic brain injury. Kerry's favorite things in life were a good cup of joe, swiss burgers, patty sausage and eggs over easy and to chat with friends. He was a regular at the local diner's in Moab. Everyone in Moab knew Kerry and knew what a pure soul he was. He will be remembered for his intoxicating smile and laugh that you could feel in your own soul! Everyone who had the privilege of really knowing Kerry got to love him and that love was returned a million times over. Survived by his Daughter Amanda (Anthony) Fernandez, Grandchildren Isabelle and Ronan, Brother Howard (Margaret) Swink, Nieces Tamara, Rachel, Karissa, Tesa, Teona. Nephews Shad and Lonnie Preceded by Father Shannon Albert Swink, Mother Dortha Mae Oneil, Brother Donald Swink, Sister Sheila Maxfield. A Celebration of Life service will be held next year on the weekend of his birthday August 21st 2021 at the home of his daughter Amanda. Details will be provided later in year. Please send Condolences to 5308 W Canary Grass Way, South Jordan UT 84009. 801-712-1508

Kerry Ray Swink passed away peacefully at his daughter&#8217;s side on the afternoon of Monday, August 10th 2020 at 2:10 pm at the age of 69. He died from COPD and complications due to COVID-19. Kerry was born August 19th 1950 in Tacoma, Washington.... View Obituary & Service Information

The family of Kerry Ray Swink created this Life Tributes page to make it easy to share your memories.

Kerry Ray Swink passed away peacefully at his daughter’s side...

Send flowers to the Swink family.