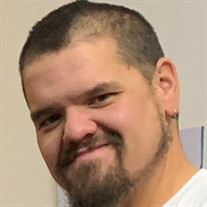 Joshua Onos Tingey, loving husband, incredible father, son, brother, and friend to all, left this world on Wednesday, March 25th, 2020, at age 35. His passing has left a large hole in so many people’s hearts, and I only hope he can feel and be surrounded by all the love that so many have for him. Josh was born on Tuesday, December 11, 1984, in Brigham City, Utah, to Danilynn Louise Tingey and Deborah Ann Daugherty. He married his sweetheart, Julia Marie Tingey on October 3, 2013. Together they were given a second chance and had a love for each other that neither of them ever believed was possible. They created a wonderful life together, full of love, adventures, laughs, tears, and lots and lots of Blackjack! They have two beautiful daughters, Teagan Jewels and Taylie Jo Tingey. These two girls have brought so much happiness to Josh’s life and he was an amazing and proud father! Josh was always on the go, getting into anything dirty and hands-on that he could, even from a young age. He loved trucks, and pretty much anything that had an engine, especially if it was a Chevy. He always talked highly of the times he spent working on his trucks, mud racing, and learning how to fix stuff with his dad. He loved swimming and hanging out with his mom, siblings and friends from the neighborhood in the backyard pool. Josh loved playing football, paintball, hunting and camping, and pretty much anything that kept him moving. Once he started truck driving, that quickly became his passion and gave him a great way to do what he loved, while supporting his family. He was an amazing provider and worked hard to take care of his girls. He started playing airsoft and found his home with the BTA team. He loved playing from day one, and found a place where we created more than friends, it became another family. In airsoft, along with everywhere else in his life, he got a reputation for being the guy that was welcoming and always willing to help. BigRig would do anything he could to help people out, from pulling numerous people out of the mud, to fixing their gear, to lending out his own. He’d give you anything he could to help you enjoy the game and make sure you were taken care of. He’d fix you a burger and offer a drink, then make you laugh, while you sit around the fire with him. Josh was a genuinely good man, who cared deeply for those he loved. He worked hard, he played harder, and he always wanted those around him to smile and have fun too. Unfortunately, he also had some demons in his life that he was just never quite able to get over, and despite his best efforts, he lost that battle in his head. I only hope that he’s found some clarity and peace now. I believe that he’s hanging out somewhere, watching over us all, and just waiting with an open chair, some good food, and a double shot of whiskey on the other side. Josh was preceded in death by his uncle Ron Onos Daugherty, his grandmother Joyce Daugherty, his grandfather Onos Daugherty, and his uncle Richard William Tingey. He is survived by his wife Julie, his girls Teagan and Taylie, and his Tribe - Brad, Crystal, Wyatt, and Bridger. His parents Debbie and Byron, and Danilynn and Sophia. His brothers Jeremy and Jarred, his sister Bridgette, brother-in-law Brent, his nephew and niece Alex and Averie. His in-laws Mike and Christine, sister-in-laws and families, Angie (Greg and Caleb), Cyndi (Peyton and Kennady), Melissa (Cory, Mackenzie and Corban), Amanda (Happy, Avery and Daxton), Jessica (Paul, Michael, and baby Adrian). His two best friends and battle buddies for life, Tony and Mater. His brothers and sisters from BTA. Extended family of grandparents, aunts, uncles, and cousins who adore him. And many, many more friends and family who love him deeply. Until this crazy world calms down, we are unable to hold a funeral for him. We will plan something when everything blows over, so that we can celebrate his life and remember Josh properly. Until then, keep the spirit of Josh alive by helping those around you and always making each other laugh and enjoy life. I think our world could use a little more BigRig energy around us right now! 🖤

Joshua Onos Tingey, loving husband, incredible father, son, brother, and friend to all, left this world on Wednesday, March 25th, 2020, at age 35. His passing has left a large hole in so many people&#8217;s hearts, and I only hope he can feel... View Obituary & Service Information

The family of Joshua Onos Tingey created this Life Tributes page to make it easy to share your memories.

Send flowers to the Tingey family.