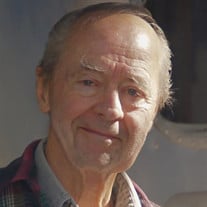 John Robert Gale, 84, passed away September 14th after a courageous and optimistic struggle with pulmonary fibrosis. John was born December 22, 1934 in Salt Lake City, Utah a son of Glen F. Gale and Doris Raddon Gale. John married Nancy Ann Weaver “the love of his life” in 1956. John attended the U of U and proudly received his Bachelor of Engineering Degree. For more than 30 years he was an executive with Hercules Corporation. The dictionary definition of “gregarious” should include the name of John Gale. He was comfortable walking the halls of the Pentagon, or tailgating at the University of Utah, or talking tools or plumbing at a local supply store (Never Big Box), or entertaining family and friends at one of his famous backyard get-togethers. John’s interests were as varied as his many friends. His idea of casual reading was “Scientific American” John loved taking family photos and cataloged them to use and produce an annual family calendar with the year’s best photos. His calendars were distributed to family each year. John’s garden and yard were meticulously planned cared for and tended. He made sure flowers of different types bloomed from spring into fall. He designed and built his own greenhouse to raise seedlings for his garden, but also for family and friends. John loved building all kinds of things in his wood shop from picture frames, furniture, planter boxes, tables and finally complex exotic wood jewelry boxes. He produced a beautiful jewelry box for all the ladies of the family, the last one given to his youngest granddaughter as recently as July of 2019. John was an outdoors-man and loved to ski, and was on the slopes of Alta regularly, even with portable O2 up until 2016. He enjoyed standing hip-deep in one of his favorite fishing streams to cast his flies with his favorite fly rod onto the rippling stream. He caught, fought and let go thousands of fish. Sometimes nearly drowning in the process! John taught and passed his love of fly fishing to his children and to this day his right-handed daughter still fishes left-handed. Each year at summers end, he packed up the Airstream and headed to the Coast of Oregon. For over 30 years the family would join in when possible for two weeks of coastal exploration. A most cherished family event. John cherished his friends and, most of all his family. They were always at the front of his thoughts, activities and plans. He quietly shared their struggles, and happily broadcast their successes. John Gale is survived by his wife, Nancy, their three children – Martin (Laurie), Dan (Cathy) Melinda East (Brad) – four grandchildren, Megan, Rob, Hannah and Emmegale. John’s ashes will be placed as privately requested. The family plans a celebration of life for close family and friends at the home he grew up in. John’s family wants those that knew him to remember him whenever you walk the beach of Oregon or ski the slopes of Alta or fish the wild and untamed streams Utah’s mountains.

The family of John Robert Gale created this Life Tributes page to make it easy to share your memories.

John Robert Gale, 84, passed away September 14th after a courageous...

Send flowers to the Gale family.