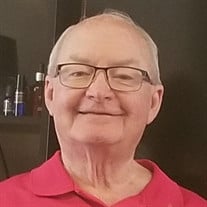 Jerry Reed Stone was born May 27, 1939, in Blackfoot, Idaho, to Victor Reed and Vilda Williams Stone. He passed away on September 5, 2020 in Lehi, Utah. As a young man he moved quite often, and at each new school he would change his name from Jerry to Reed and back again. They settled in American Falls, Idaho, where he enjoyed growing up in a small town. Jerry joined the Air Force in 1961 and served in Turkey. He eventually came to Utah and began working at the Department of Transportation where he met his future wife. He worked for the Department for almost 40 years. He also worked a second job for 28 years so Judy could be a stay at home mom. He had a work ethic that couldn’t be matched. He loved to write, paint with oils, read (especially science fiction), and garden. He never wore gloves when he puttered around with his plants because he had to feel the soil in his hands. And he never met an ice cream he didn’t like. He married Judy Gay Stephens on December 7, 1968, in Buhl, Idaho. It was with his family where his true talents came to the surface. He was a loving husband, dad, grandpa and friend. He loved his children and wife more than life itself. Later in life, as a grandpa, he was a great fishing partner and a fun companion at the arcade. Jerry was a very gentle, quiet giant of a man, and he constantly prayed for his treasures. He is survived in death by his wife, Judy; his daughter, Alaina; his son, Scott and his wife, Elizabeth, and their children Zachary, Chloe, Katelyn, and Nathan; his sisters Mayvis Clayre Stoddard and Barbara Sage; his mother-in-law Marjorie Stephens; and his brother-in-law Delmar Stephens and his wife Maryann. At Jerry's request, there will be no funeral. Arrangements are under the direction of Wiscombe Memorial.

Jerry Reed Stone was born May 27, 1939, in Blackfoot, Idaho, to Victor Reed and Vilda Williams Stone. He passed away on September 5, 2020 in Lehi, Utah. As a young man he moved quite often, and at each new school he would change his name from... View Obituary & Service Information

The family of Jerry Reed Stone created this Life Tributes page to make it easy to share your memories.

Send flowers to the Stone family.