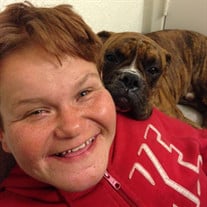 Jeanie Lee Boulter, age 32, passed away on April 28, 2019 at Salt Lake City, Utah due to Ovarian Cancer. She was born on May 6, 1986 in Salt Lake City, Utah to Janean Weight and Leonal (Nick) George Boulter. Jeanie grew up in Sandy City where she attended school and graduated from Jordan High School. She loved going to the Boys and Girls Club and enjoyed the activities and friends that she had there. Every summer, in her youth she would go to Camp Kostopulos where she participated in horseback riding, arts and crafts and camping. Jeanie made friends easily and enjoyed meeting new people. She had a huge smile and an infectious giggle. Jeanie loved animals especially her dogs, Stormy and Zeus. Even though Jeanie was born with Sacral agenesis, which affected her lower body, she moved about with her arms and hands and was an inspiration to all who met her. She was fearless in her wheelchair and could be seen with her dog tucked under her arm zipping through the neighborhood. Freedom meant so much to Jeanie, especially the freedom to live her life the way she wanted - and that she did. Jeanie lived in Sandy, Fillmore, Salt Lake City and most recently Vernal, Utah. Jeanie was a member of The Church of Jesus Christ of Latter-Day Saints. Jeanie is preceded in death by her loving Mother and Father. The three of them were so close and did everything together. She is now reunited with them and encircled about with great love and joy. They are free from the physical and temporal challenges that each of them experienced while living. Jeanie is survived by her brother, Robert Dee Weight, Aunts Kathy Young, Nadine Runchel, Sharlene Weight, Uncle David Weight and special friends Shane Amundsen and Maya Pejic whom she considered as family. A Memorial Graveside service will be at 11:00am on May 17, 2019 at Evergreen Cemetery located at 1997 South 400 West in Springville, Utah. At this time both Jeanie and her father’s remains will be laid to rest.

Jeanie Lee Boulter, age 32, passed away on April 28, 2019 at Salt Lake City, Utah due to Ovarian Cancer. She was born on May 6, 1986 in Salt Lake City, Utah to Janean Weight and Leonal (Nick) George Boulter. Jeanie grew up in Sandy City where... View Obituary & Service Information

The family of Jeanie Lee Boulter created this Life Tributes page to make it easy to share your memories.

Send flowers to the Boulter family.