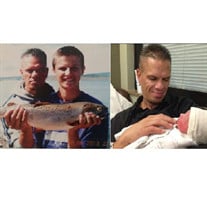 Jason has reached Heaven and has been received into the love of our Heavenly Father, as well as our loved ones before us. He is not gone from us, Jason is still with us; watching over his family, friends and his children Tyson and Azia. Jason is a beautiful person inside and out with lots of empathy for others. He had a very kind nature and was very loving and caring. He often helped his father with mowing and taking care of the yard, and they would cut down trees together. When Jason stayed with his mother, he helped her immensely, and even built her a barn. Jason was a natural problem solver and could look at a situation and figure out how to fix things. Jason also had a special love for his parents and children that put a little twinkle in his eye. Jason is a father, a son, a brother, an uncle, a Friend and the youngest in the family. He was so fun and playful and inviting to be around. He made us laugh often and we loved hearing the sound of his laughter and that big beautiful smile of his. He was loved by his nieces and nephews (Ryan, Tim, Janie, Dallin, Shannon, Brayden, Hailey, Rylee, Sage) since he was such a fun uncle. One winter in 2019 he enjoyed making some travels giving hot fresh oatmeal to the homeless and took them coats and blankets. He loved camping and fishing and had fun trips with family and extra ones with his brother and son. He liked dancing around to energetic techno music. He enjoyed a trip to Disneyland with his brother and sister in-law. Jason had a heavy burden of mental illnesses that plagued him for a long time. He worked with Changes Counseling for several months and soaked in all the classes he could and they said they were so impressed with his attitude, determination, and progress and he would remind others in the class the value and importance of the classes and how he changed his life. The director wrote on his certificate that Jason showed the highest level of dedication EVER seen at Changes Counseling. Jason had to deal with a battle of off and on drug use and was determined through out the last year of his life he was drug free and earned his one year key tag from NA that meant so much to him and we were so proud of him for. Jason is a warrior and he fought a really hard fight. We want to thank the NA community and Changes Counseling for all the help and support they gave to him. Jason fullfilled his mission and has peace from his illnesses and hopes for us to love our a little ones even more. We love and miss you so much Jason and know we will see you again. Jason is survived by his son- Tyson Jason Hale; Daughter- Azia Jade Hale; Father- Charles Hale, Mother- Jeannette Hale (Arthur McGrath), Sister- Audrey Nowotny (Neil), Sister- Tammy Newkirk Wiedbusch, Brother- Matthew Hale (Mitzi), Sister- April Hale, and many aunts, uncles, nieces,nephews and cousins. He is welcomed to his eternal home by his Grandparents- Ellis and Lavina Hale and Moylan and Siri Walsh as well as his uncle, Roger There will be a viewing at Wiscombe Memorial, 47 S Orange St Salt Lake City, on Friday February 5th 2021 from 2:30-4:00pm

Jason has reached Heaven and has been received into the love of our Heavenly Father, as well as our loved ones before us. He is not gone from us, Jason is still with us; watching over his family, friends and his children Tyson and Azia. Jason... View Obituary & Service Information

The family of Jason Edward Hale created this Life Tributes page to make it easy to share your memories.

Jason has reached Heaven and has been received into the love...

Send flowers to the Hale family.