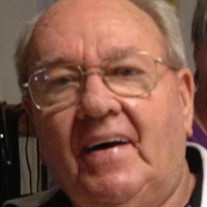 Harvey William “Bill” Rawlins passed away on August 27, 2021. Bill was born November 7, 1935 Pocatello, Idaho. He was the oldest of seven children born to Eldoris and Peggie Morby Rawlins. Bill grew up in Salt Lake City then later moved to Davis County. He served in the US Army stationed in Korea from 1955 through 1956. He was self employed for many years installing heating and air conditioning systems. In his later years he was a long haul truck driver with his youngest son Jimmy. He married Carol Joyce Burningham, they had five children. Later they divorced and Bill married Mau Phan. She has been his caregiver through his long battle with dementia and Alzheimer’s. He loved raising and racing horses. He won many trophies. Racing was a family affair enjoyed by his father, brothers, and his children. He also loved to fish, especially at Strawberry Reservoir. He is survived by his wife Mau, sisters Becky Moss and Wendy Noyse; children Kathy Brown (Jeff), Charles M. Rawlins (Teresa), James B. Rawlins (Sharon) and Karen Day. 12 grandchildren, 26 great grandchildren and 1 great, great grandchild. He was preceded in death by his parents, siblings; Bob, Barbara, Ben, Blair, his son; Brad, Grand Children; Deja, Lacey, Camie, and son-in-law; Brent Day. A viewing will be held in his honor Wednesday September 1, 2021 9:30 am to 1:30 pm at Wiscombe Memorial Funeral Home 47 Orange St. B-5 Salt Lake City, Utah 84116

Send flowers to the Rawlins family.