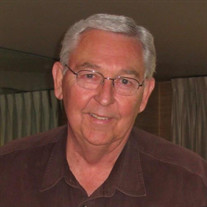 Harold Glenn Anthony, October 19, 1940 – November 14, 2020 Glenn died. That is all he felt obliged to report. His family, however, is truly grateful Glenn lived. Whether you knew him as Glenn, Duke, Dad, Pops, or Papa, he lived a full-to-the-brim life until his well-worn body could no longer support his indomitable spirit. He left this earth early in the morning, November 14, 2020. His dear Ruth anxiously greeted him with the bright, beautiful smile he fell in love with as a teenager. His exit was punctuated with an awesome lightning and thunder storm. It was a fitting tribute to his striking stature, strength and character. Glenn’s life was forever enriched on July 21, 1960, when he and Ruth were married for time and all eternity in the Logan, Utah temple. They loved, liked and served each other throughout their marriage until Ruth’s passing on June 18, 2020. Their four children, Layfe Robert Anthony (Mariby Stewart), Layne Henrik Anthony, Sonja Camille Anthony (Kenneth Hansen) and Alisyn Marie Anthony (Joe O’Neal) are so thankful to have Glenn as their father, mentor, friend and superhero. He reminded them often, “You really only ever own your integrity and your knowledge.” He lived by the mantra, “If the bastards can beat you, they deserve to win.” Glenn valued education and instilled the love of life-long learning and the merits of hard work into his children and grandchildren. He graduated from Cyprus High School and worked his way through college as the smelter foreman at Kennecott. He earned his Bachelor of Science degree in Mechanical Engineering at the University of Utah. Glenn worked from the time he was a young boy until shortly before his passing. He was smart and creative. He was a problem solver. He was a respected leader, business owner and multi-talented craftsman. Glenn made, and kept, friends all over the world. His intelligence, work ethic, wisdom, wit and humor drew people to him. He particularly treasured friendships with his lifelong pal Kenny Lyon, his one-dollar betting-buddy Bill Wilson, his kindred spirit Earl Black and his respected confidant Paul Clayton. Glenn was fiercely independent. As ailments and pain slowly robbed him of his physical freedom, he never complained. He Chose to be Cheerful. He earnestly thanked every medical professional, neighbor, friend and family member who served him in any way. Happily, his keen mind and genuine personality remained active and sharp until he passed. Alisyn was Papa’s full-time, selfless, caregiver as his health declined. She knew his health needs better than his doctors. We are so grateful to her. We credit her knowledge, persistence and attention to detail for the extra years we have enjoyed with him. Glenn considered his other devoted caregiver, Ame Iloa, an extra daughter. He welcomed her, Paul and their children Sake, Ailiri, Bet and Lin into our family. These remarkable children brought him joy each time they visited. Glenn is survived by his adoring children Layfe, Layne, Camille and Alisyn and all their children. He recently marveled that a poor kid from Chesterfield had been blessed with such smart, accomplished, wonderful grandchildren. Ian (Corinne), Chase (Catalina), Devin, Sierra, Tate, Paige, Isaac, Nina and Jessica; bonus grandchildren Taylor, Alys, James, Austin, Emma, Hunter, Brinley and Boston. Glenn is preceded in death by his wife of 60 years, Sonja Ruth Bergstedt Anthony; his parents Robert Harold Anthony and Frieda Hermina Hubner Anthony; siblings Carolyn Jean Scholes and Earl Calvin Anthony. Papa lived for his family. He left us with a legacy of honor, strength, integrity, kindness, respect and love. We desperately miss you Papa but we are so happy you and Nana are together again. Thank you for giving her a hug from all of us. We love you! You beat the bastards! Due to COVID-19 restrictions, a graveside service, with immediate family, was held Wednesday, November 18, 2020 at the Salt Lake City Cemetery.

Harold Glenn Anthony, October 19, 1940 &#8211; November 14, 2020 Glenn died. That is all he felt obliged to report. His family, however, is truly grateful Glenn lived. Whether you knew him as Glenn, Duke, Dad, Pops, or Papa, he lived a full-to-the-brim... View Obituary & Service Information

The family of Harold Glenn Anthony created this Life Tributes page to make it easy to share your memories.

Send flowers to the Anthony family.