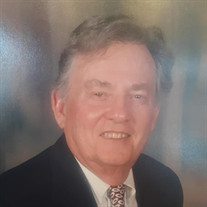 Gordon Lee Bowers, age 83, passed away peacefully at home on Jan. 16, 2020. He was born July 20, 1936 in Salt Lake City, Utah to Ivan and Pearl Sollis Bowers. He has 2 younger brothers, Bob (Bonnie) and Doug (Ann). Gordon was married in 1955 to Denise Johnson. They had 5 children together. Kathi (Richard); Mitchell, deceased (Denice); Brenda (Thad); Donald deceased infant; Steven (Dani). They later divorced. Gordon married Jan Blackhurst in 1982. They have been married for 37 years and have 1 son together, Nathan. Gordon was very charismatic and had many talents. He was very athletic loving tennis, skiing, and golf. He was creative and was a gifted artist. He enjoyed gardening and his yard was always beautiful. He had a variety of careers. Bristol Meyers Pharmaceuticals; Commercial Real Estate/Developer (owner) and retired as an Investment Broker, with what is now Wells Fargo. After retirement, he pursued art with painting and taking art classes at the U. He also took many vacations including trips to Europe and Fiji. He had a full life and will be greatly missed. He is survived by his wife, Jan; 4 children; 13 grandchildren; 22 great-grandchildren; 2 great great-grandchildren. He was preceded in death by his parents and 2 sons. Funeral Service will be held on Friday, January 24, 2020. Service at noon. Viewing before service at 11 a.m. Location: LDS Chapel, 1300 West 8950 South, West Jordan, Utah, 84088. Interment: Sandy City Cemetery, 700 East 9000 South, Sandy, Utah, 84070. Arrangements are under the care of Wiscombe Memorial.

The family of Gordon Lee Bowers created this Life Tributes page to make it easy to share your memories.

Gordon Lee Bowers, age 83, passed away peacefully at home on...

Send flowers to the Bowers family.