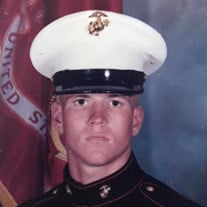 Edward E. Comer, Jr., age 51, passed away suddenly and unexpectedly on Friday, September 6th, 2019, in Salt Lake City, Utah. He was born on January 18, 1968, to Bernice Atwood Comer and Edward E. Comer, Sr. in San Bernardino, California. He was married to Barbara Ann (Bonzo) Comer of West Wendover, Nevada. Ed was everyone’s favorite red head and was adored by his brothers and sisters. He moved to Lincoln County, Nevada in 1982, and attended Lincoln County High School in Panca, Nevada, where he excelled in Football, Wrestling, and leadership positions. He graduated in 1986. He joined the United States Marine Corp Reserves before he had graduated and went from school to Boot Camp in California almost immediately. While at Boot Camp he served as both a squad and platoon leader. After Boot Camp, Ed attended Dixie State University where he was studying Life Science. He left school after a year and decided to participate full-time in the Marine Corp, where he saw “the world from a Navy vessel” as he put it. After several years, he went back on reserve status and moved to Wisconsin to be near family there and to try his hand as a dairyman. That was short lived due to the United States involvement in Desert Storm. He was called up to serve on active duty with his reserve unit from Minneapolis/St. Paul. He served 8 months in Kuwait, where he was awarded the Bronze Star for Valor, and then returned home where he moved to Salt Lake City to marry his fiance, Barb. They were later divorced, but remarried in 2014. He remained in the Marine Corp Reserves for another 4 years, serving with a LAV unit out of Tooele. He always viewed his time in the service as a necessary, vital part of being a citizen. He had a deep love for his country. Ed went on to serve as a construction supervisor, working for the companies Ropaca and Uprite Systems, which placed conveyors and interior racking in large distributions centers across the U.S. He was gifted welder, a talent he learned while at LCHS. He was also a great supervisor and could be counted on to bring jobs in on time. Ed was a quiet, kind, and highly-intelligent man. He read everything he could get his hands on. He was versed in everything from Philosophy to Mechanics. Science fascinated him and he was enrolled to go back to school to become a Veterinary Technician , a field in which he would have excelled due to his lifelong love of animals and creatures of all varieties. Ed constantly helped others find the best in themselves, but was often much too hard on himself. Edward leaves behind his wife, Barbara Ann Comer of West Wendover, Nevada; sisters Neva Gleason, Naomi Gleason, Tammy Comer, and Brother Delbert Gleason, all of San Bernardino, CA; and his father, Edward E. Comer, Sr., sisters Dawn, Robin, and April Comer, of Mondovi and Eau Claire, Wisconsin. He was preceded in death by his mother, Bernice, and brothers David Gleason, Donnie Gleason, and sister, Ellan Erickson, all of California. He leaves behind many nieces, nephews, and cousins, most of whom consider him to be more their brother than their uncle. The absence of his presence will be felt for many years to come. No memorial is planned at this time, as those were Edward’s wishes. In lieu of flowers, donations can be made to either your local Veteran’s Administration, Valor House at the VA in Salt Lake City, or to a Wounded Warriors project. These are causes that Ed felt strongly about.

The family of Edward E. Comer Jr. created this Life Tributes page to make it easy to share your memories.

Send flowers to the Comer family.