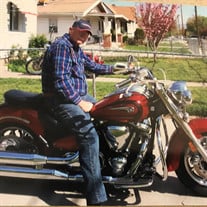 Dan V. Lockhart passed away on October 4, 2019 in Salt Lake City, Utah. He was born on August 26, 1935 in Provo, Utah to Eugene Lester and Laura Dorgan Lockhart. Nicknamed Lucky, Dan had a very full life with many different forks in the road. He proudly served 13 years in the service of our country in the Air Force and the Army when he met Mary and swept her off her feet. They married in Anchorage Alaska in August of 1960 and began the 59 year journey of a life full of joy, happiness and "Jesus H Christ Mary". Upon leaving the service, he held several different positions but the one that was most memorable is Helping Hands where he touched many lives resulting in them declaring a "Dan the Man Day", He was presented with balloons and special messages from all at each stop on his route .His passion for old cars and trucks provided adventure while his love of motorcycles gave him wings to fly. Mary swears Gene's love of motorcycles is a result of a ride she took with Dan the night before he was born. He enjoyed camping where he shared his love of the outdoors with his family. An avid painter, leaves behind his cherished memories on the canvases he brought to life. Dan and Mary settled in Church Wells, Utah where they have a large extended family, supporting and helping each other. With a quiet voice and a look that meant business, he instilled strong values in his children, ensuring they were prepared for whatever life threw at them. All that knew Dan share stories of his kindness, compassion, integrity and the fact that he was a prankster. His battle is now at a close and while he rests in peace, his legacy of strength, honor and courage will continue to live on in his children, grandchildren and great grandchildren. All are encouraged to share their fond memories, stories that have a special place in your heart and pictures you treasure. Survived: Wife Mary Lockhart, Children Bruce and wife Heather Lockhart, Debbie and husband David Spoons, Gene Lockhart (Kim), Cathy and husband John Frederick, Francine and husband Tony Sicox. Brother Ted and wife Peggy Lockhart. Ted "Teddy Bear" Fonnesbeck. 12 Grandchildren and 14 Great Grandchildren. He was preceded in death by Grandson Brandon Lockhart, Uncle Zeke Dorgan. A Celebration of Life will be announced at a later date.

Dan V. Lockhart passed away on October 4, 2019 in Salt Lake City, Utah. He was born on August 26, 1935 in Provo, Utah to Eugene Lester and Laura Dorgan Lockhart. Nicknamed Lucky, Dan had a very full life with many different forks in the road.... View Obituary & Service Information

The family of Dan Vee Lockhart created this Life Tributes page to make it easy to share your memories.

Send flowers to the Lockhart family.