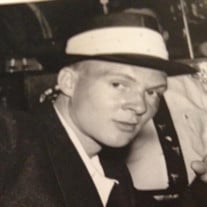 Life should not be a journey to the grave with the intention of arriving safely in a pretty and well preserved body, but rather to skid in broadside in a cloud of smoke, thoroughly used up, totally worn out, and loudly proclaiming “Wow! What a Ride! Hunter S. Thompson On the morning of January 3rd, 2021 our husband, dad, brother, grand and great-grandfather, Clint Judd, was met by his mom and son, Brock, in a shiny mustang and flown to paradise. Dad was born in a small town, Ashton, Idaho, on September 13, 1936 to Fred and Vanorda (Martindale) Judd. They later moved to Salt Lake where he grew up. The last field trip dad and I took was a ‘This Is Your Life, Clint’ tour. We drove by the home he and his brother Pete, sister Janet and mom had lived. What used to be the Charleston Apartments where he worked parking cars. Stewart Jr. High and East High School where he had graduated. The Salt Lake City Cemetery where he worked after high school and also where he met my mom. Who knew that cruising the Salt Lake Cemetery was a was a way to meet someone? Anyway, out of that meeting and marriage 4 kids were born; Debbie, Kyle, Gaylynn and Brock. He worked so hard to give us what he didn’t have being raised by a single mom. Dad worked and retired from Kennecott Copper, was a staunch member of the Steel Worker’s Union & a lifelong Democrat. He loved Mustang cars ever since the first one came out in 1964 1/2. I don’t think he was ever without a Mustang since our teen years, with some of us taking our driver’s test in a green Mustang 3 on the floor. It was also back then that he bought his prized Mustang, the Acapulco blue 1967 GT. THAT particular Mustang was NOT a family Mustang, nope it stayed in the garage. However, If you were lucky and stopped by when he got it out for a ride, you may be asked to join but only if you were up to getting the you-know-what scared out of you. After all, there is no ‘slow’ in Mustangs. Our dad was a person of high integrity. He was honest, caring, funny and had the loudest laugh of anyone we knew. When we were young our friends all called him “the cool dad”. And he was! His favorite band was the Eagles and he played their songs over and over his whole life. I played them for him his last night. He loved the Utah Jazz & any football team Alex Smith was on. Family meant everything to him so there were very few events, games, or recitals we kids or grandkids (Alex, Anthony, Andrew and Melissa) had that he missed. He was even able to attend some of his great-grand kid’s (Zach, Ryker and Blake) events. When we were young dad bought a ski boat and taught us all to water ski. Later he taught all of his grandkids to water ski too. Those memories are all of our favorite ones of him. Dad married Jean (JJ) 40 years ago & they spent the last 40 years laughing through life together. We will never be able to thank Jean enough for caring for loving & caring for our dad, especially this past year. Dad didn’t practice an organized religion the past 20 or so years but had a deep faith in God and Jesus. He was the most spiritual, non-judgemental person we have known. He will be missed so much but we will spend the rest of our lives telling our memories of him over and over to each other & laughing just as loud as he always did.

Life should not be a journey to the grave with the intention of arriving safely in a pretty and well preserved body, but rather to skid in broadside in a cloud of smoke, thoroughly used up, totally worn out, and loudly proclaiming &#8220;Wow!... View Obituary & Service Information

The family of Clinton Lavoy Judd created this Life Tributes page to make it easy to share your memories.

Life should not be a journey to the grave with the
intention...

Send flowers to the Judd family.