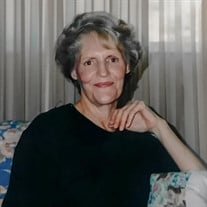 Carol Evelyn Christensen Swanson passed away on November 1, 2018 after a long illness. She was seventy-eight years old and a long-time resident of Salt Lake City. Carol was born in Idaho Falls, Idaho on April 30,1940 to Ethel Weeding Christensen and Gilbert B. Christensen. Her father, Gil, was a successful businessman who owned a car dealership for many years in Blackfoot, Idaho. He passed away when Carol was only fifteen years old, and so she and her mother moved shortly thereafter to Salt Lake City, where she was to live for the rest of her life. Carol married her first husband, Charles Phillip Tjas in 1956, while she was still in high school. They had one son together, Kevin Tjas, but they divorced only two years later. In 1971, Carol married Carl W. Swanson. They spent twenty-five happy years together. Carl passed away in 1996. Carol was predeceased by her mother, Ethel Weeding Christensen, her father, Gilbert B. Christensen, and her son, Kevin Tjas, She was a warm and generous person, who loved to tell stories about the days she spent on grandparents' dairy farm in Wapello (Blackfoot), and, later, her uncle's farm outside of Burley, Idaho. Before Carol became ill, she spent several years caring for three close friends who were terminally ill. She was a very good cook and loved to prepare homecooked meals for friends and family. Carol is survived by her ninety-one year old aunt, Barbara W. Morseburg, who is the youngest of her nine aunts and uncles on her mother's side. Her aunt Barbara used to babysit her when she was a little girl and they remained close throughout their lives. Her uncle, Gale Weeding, helped and advised her until his passing in 2017. Her other uncle, Rulon Weeding, and the rest of her aunts, Agnes, Thelma, Ruth, Helen, Fern, and Elona, predeceased her. She is also survived by her cousins, Dan Corbett, Alysse Juleff, Ronald Juleff, Alex Kowalyk, Marla LeGourrierec, Cheryl Martin, Jeff Morseburg and Craig Weeding. Her aunt is very grateful to her wonderful friends at Victoria Woods Apartments and the kind and devoted nurses and doctors who cared for her in the last years of her life.

Carol Evelyn Christensen Swanson passed away on November 1, 2018 after a long illness. She was seventy-eight years old and a long-time resident of Salt Lake City. Carol was born in Idaho Falls, Idaho on April 30,1940 to Ethel Weeding Christensen... View Obituary & Service Information

The family of Carol Evelyn Christensen Swanson created this Life Tributes page to make it easy to share your memories.

Send flowers to the Swanson family.