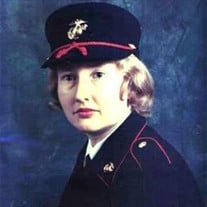 Carol Lynn Gerber Davis was born on 4 January 1941, in Bell, California, to Lambert and Odessa Tolman Gerber. She died in her apartment on 25 June 2019, in Salt Lake City, Utah. Carol grew up in Gridley, California, which is in Northern California. After high school, she went to Yuba Junior College. In 1964 she went on a two-year mission to the North West Native Americans and preached to the Zuni and Isleta Indians. In 1966 she joined the Marines and served three years, mostly in supplies in El Toro, California After the Marines, she used her GI money and went to Brigham Young University, majoring in Elementary Education. She graduated with a BA degree in Elementary Education in 1972. In a BYU Book of Mormon class for return missionaries, she met Robin Davis. After a short courtship, Robin proposed to her. She accepted and they were married in the Provo, Utah, temple in 1972. From this union came six children: Rebecca, Karalee, John, Michael, Mary and Ann. Rebecca has 5 children, John has 4 children and Michael has 2 children. Carol and Robin served a full-time mission together in the Family History Mission in Salt Lake City, Utah, from 2006 to 2008. Carol loved the gospel of Jesus Christ and taught her children well. She also loved to read Star Wars books, to watch movies and to watch TV. Her patriarchal blessing states: “You shall become the mother of a large family who will rise up and call you blessed for your devotion to the Gospel, for your knowledge, wisdom, understanding and faithfulness to it.” On Thursday, June 27, 2019 there will be a viewing, at 11:30am, and after that, funeral services at 12:30pm will be held for Carol in the Rose Park Stake Center, 760 N. 1200 W., Salt Lake City, Utah. After the viewing and funeral services she will be interred on Thursday, June 27, 2019, in the Utah Veterans Memorial Park, 17111 S. Camp Williams Rd., Bluffdale, Utah.

Carol Lynn Gerber Davis was born on 4 January 1941, in Bell, California, to Lambert and Odessa Tolman Gerber. She died in her apartment on 25 June 2019, in Salt Lake City, Utah. Carol grew up in Gridley, California, which is in Northern California. After... View Obituary & Service Information

The family of Carol Lynn Davis created this Life Tributes page to make it easy to share your memories.

Send flowers to the Davis family.