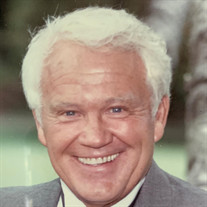 Carl Soderlind, age 86, passed away in Salt Lake City, UT, on December 24, 2019. He was born in Duluth, Minnesota, on August 22, 1933, the son of Karl and Olga Soderlind. Carl was active in sports (particularly football), choir and Boy Scouts, achieving the rank of Eagle Scout. He attended Northwestern University on a football scholarship and earned his degree at the University of Minnesota. Carl served in the US Navy from 1954 to 1956. He was a dedicated Freemason and Shriner. In 1956, Carl married Janet Pierucci with whom he had a daughter, Deborah Soderlind Richardson of Petaluma, CA. In 1988, Carl married Susan Etterbeek. They have a son, Eric Karl Soderlind, of Salt Lake City. Carl served as Chairman and CEO of Golden Bear Oil Specialties in California from 1997 to 2001. From 1961 to 1996, he served in various capacities in Witco Corporation of New York City, including Senior Executive Vice President and member of the Management Committee. Carl had extensive experience in the specialty oil and chemical products businesses as well as investor relations. Carl was a founding member of the Chemistry Council of New Jersey. He served as Chairman of the CCNJ Board of Directors from 1994 to 1996 and past chairman-emeritus until 2014. Additionally, Carl was on the Board of American Vanguard Corporation from 2000 until 2015. His sound advice on a broad range of business matters will be missed by every Board and organization he served. Carl was always devoted to his family and friends. He is survived by his loving wife of 31 years, Susan, daughter Deborah (James) and son Eric. He is also survived by his grandchildren Douglas (Aimee), Darci, Dianna (Chad) and Leo Karl. Carl leaves behind 3 great grandchildren, brother-in-law David Etterbeek and sisters-in-law Karen VanderHorn and Debra Dyer. Carl will be greatly missed by many nieces and nephews. A celebration of Carl’s life will be held on April 4, 2020, at 11:00 am at Park City Community Church in Park City, UT. Arrangements are under the care of Wiscombe Memorial.

Carl Soderlind, age 86, passed away in Salt Lake City, UT, on December 24, 2019. He was born in Duluth, Minnesota, on August 22, 1933, the son of Karl and Olga Soderlind. Carl was active in sports (particularly football), choir and Boy Scouts,... View Obituary & Service Information

The family of Carl Robert Soderlind created this Life Tributes page to make it easy to share your memories.

Send flowers to the Soderlind family.