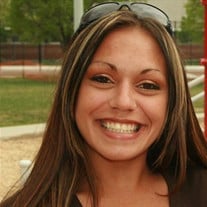 Alicia Ann Griffin, 33, of Magna Utah, passed away unexpectedly on May 15, 2019 in Salt Lake City, Utah. Alicia was born in Salt Lake City, to Lenda Jennings and Patrick Griffin, on September 1, 1985. She was married to Wyatt Willard now in its 14th year, and together they have two beautiful daughters. She was a homemaker, a role she cherished. Everyone who had the chance to meet or get to know Alicia has stated she had a beautiful exotic look with a huge infectious smile that would warm your heart. She was one firecracker and a strong willed, determined woman, who would stand up for what she believed in. Yet, she also had her other side, a very gentle, humble, and shy young girl full of giddiness. She would give her last possession to someone who needed it more than herself. Material things held very little value to her, but, sentimental possessions were priceless. She loved being pregnant. Growing up, she was her daddy’s little girl. She was truly appreciative of things people did for her. Her interests included cooking, not only did she love to cook but she was a very good cook. She also enjoyed spending time outdoors at parks, camping, and boating with her family and friends, watching movies and her favorite TV shows. She had a place in her heart for babies and elderly people as she was a natural caregiver. She especially enjoyed the short time she had to spend with her new grandson. One of her favorite places to live was in Northern California where she enjoyed the Redwoods, ocean and the casinos on the Reservation. She collected photographs, poems, flowers, and really, anything she thought was beautiful. Her love of beauty showed in her crafts. Alicia is survived by her spouse Wyatt Willard; Children, Lexie and Brooklyn; Step-daughter, Ashlan Willard (Zach Carlton), Grandson, Xayden Carlton; Brother, John Clark ( Wendy Wright); Sisters, Crystal Griffin (Cheyenne Webb), who was also her best friend, Cheri Polaco ( Chris Polaco); Parents, Lenda Jennings-Routier ( Steven Routier), Patrick Griffin ( Eli Sears-Griffin), Mother-In-Law, Larry Green ( Tamara Green); Aunt, Brenda Posey Simon ( Ken Simon) Sister In-Law, Marci Miller; Immediate family on the Willard side, Sister In Law, Brandy Stapleton ( Terry Stapleton), Brother In Law, Gordon Willard, Sister In Law, Nicole Larsen (Joe Larsen), and many nieces and nephews and other relatives. The family of Alicia Griffin wishes to extend our sincere thanks to Jordan Valley Hospital staff in the ICU.

Alicia Ann Griffin, 33, of Magna Utah, passed away unexpectedly on May 15, 2019 in Salt Lake City, Utah. Alicia was born in Salt Lake City, to Lenda Jennings and Patrick Griffin, on September 1, 1985. She was married to Wyatt Willard now... View Obituary & Service Information

The family of Alicia Ann Griffin created this Life Tributes page to make it easy to share your memories.

Send flowers to the Griffin family.